Of phantoms, moments in the woods, and the surprisingly fruitful argument over spectacle and substance in musical theatre 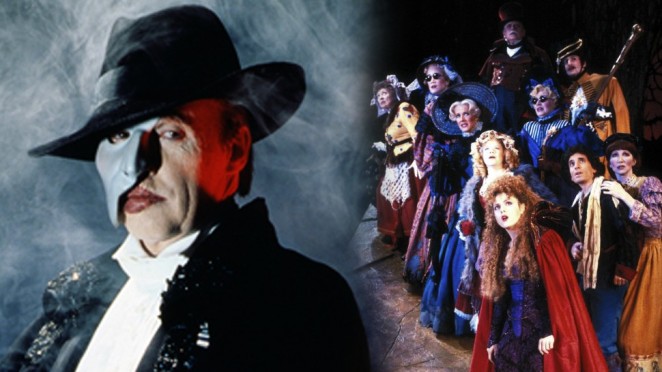 Earlier tonight, I was lying on my bed, scrolling through youtube to see if there were any new insightful interviews with or commentary on Sondheim’s writing process, as one is wont to do when they can’t actually go outside and do anything. One of the videos that came up was the complete broadcast of the 1988 Tony Awards. It was then that I was reminded that Into the Woods and Phantom of the Opera came out in the same year and competed for most of the major awards. I’m not entirely sure why that struck me as so strange, but it did. And maybe strange isn’t the right word. Maybe I was struck by it because in so many ways, it feels emblematic. They’re such entirely different ends of the musical theatre spectrum that I never think of them together, much less think of the fact that their original audiences were processing them at the same time. Two fairly recent trends – the giant mega-budget megamusical full of visual and vocal pyrotechnics and the smaller scale musical as vehicle for revising and reevaluating the stories our culture tells itself – each reaching their full expression in the same Broadway season.

And looking through the nominees and winners for the ensuing years, it feels like the two shows began an argument about what the musical could (and possibly should?) be, a continual seesaw from big sparkly solidly crafted crowdpleasers with soaring melodies to more musically and philosophically daring and adventurous explorations of the myths that mold our society that continues to this day (and includes the rather surprising awards defeat of Wicked, which may very well be the exact center of the venn diagram between the two).

The Best Play nominees of 1988 are almost more mind blowing in their own way- David Henry Hwang, August Wilson, Lee Blessing, and David Mamet all putting new works in front of audiences- two about the elaborate ritual dance of power between white men and two diving straight into the thorny thickets of race, gender, and the painful legacies of othering. What a wild year that must have been.

In a way, reviewing this history gives me hope for the future of theatre. I feel like the dominant narrative about Broadway theatre (and musical theatre especially) is one of true depth and innovation being pushed out in favor of crass, commercial shows that appeal to the lowest common denominator. But looking through the Tonys nominee list from 1988 to now just doesn’t bear that out.

Sure, some years have been thinner than others (looking at you, 1989 and 1995), but the conventional narrative completely ignores the fact that A) Many of the big commercial shows of the last twenty years are a lot more genuinely entertaining (and sometimes even thoughtful) than they’re given credit for, and B) More literary revisionist musicals that experiment with narrative and musical forms have undergone a major renaissance in the last decade. Just the last five years (heh) has seen shows as complex and varied as Fun Home, The Visit, Hamilton, Bright Star, Shuffle Along, Waitress, Dear Evan Hanson, Come From Away, Natasha Pierre and the Great Comet of 1812, and Hadestown. And that’s not even counting the fascinating off-Broadway experimentation of Lortel nominees like this year’s very challenging big hits A Strange Loop, Soft Power, and Octet.

Ultimately, Phantom and Into the Woods basically split the awards that year. Phantom made off with the more production-oriented Best Director and Best Musical awards while Into the Woods laid claim to the creatively focused Best Book and Best Score categories. And really, neither show’s legacy has completely triumphed over the other. Phantom ran for a billion years, while Into the Woods flourished in countless regional, community, and school productions in a way that its rival’s enormous scale never could. And rather than shrink the sorts of shows we see now, in a way their two entirely different views of what musical theatre is may actually be symbiotic – shows like Phantom pull in new audiences with their wide appeal and shows like Into the Woods give those new fans weightier material to chew on as they mature and keeps them coming back. At least, that’s how it worked for me. So in this time where so many of us are fretting over the future of theatre after the pandemic, it might not hurt to take a look at our recent past and realize that it may have been a lot more varied and innovative than the popular doomsday narrative might lead us to believe, which could (dare I say it) actually bode well for what comes next.